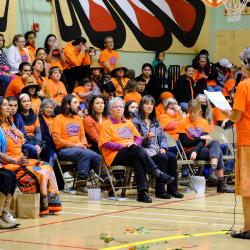 Alaska Friends Conference approved the language below at our Annual Sessions in August 2022. Below are PDFs of this same apology, with either footnotes or endnotes.

Photo credit: Jan Bronson of Anchorage and Cathy Walling of Fairbanks, representing the Alaska Friends Conference, apologize to Alaska Native communities for the boarding schools it ran in Alaska and the United States. The apology took place at Sayéik Gastineau elementary school in Juneau, the former site of a Quaker mission school, during Orange Shirt Day on Friday. (Photo by Lisa Phu/Alaska Beacon)

The Religious Society of Friends ran about 30 residential schools for Native youth throughout the U.S. and its territories.[i] In participation with other churches and the government, the Religious Society of Friends ran schools that sought to assimilate Alaska Native children and youth into White culture. These schools separated children from their birth culture and languages. Once fractured, these ties are difficult and sometimes impossible to mend.

The methods used in some of the Friends schools were harsh and often cruel.[ii] Alaska Native people have described to members of Alaska Friends Conference (and other listeners) what it was like for them or their relatives to go to a school where children were tortured and/or physically, sexually, emotionally, spiritually, or otherwise harmed. They described that punishment like this caused humiliation, shame, and alienation. You, your ancestors nor anyone else deserves this kind of treatment. We are deeply sorry.

We members of Alaska Friends Conference apologize that Friends punished you, your parents, or your grandparents for speaking your own languages. That is an act of oppression and cultural annihilation.  Much of a people’s world view and local knowledge is contained in language.  To attempt to force you to learn English – not in addition to your own mother tongue, but in place of it – was wrong in so many ways. We are deeply sorry.

We apologize that Friends also banned dancing, teaching that it was evil and creating repercussions across generations. To lose dancing is to lose an important way to celebrate, communicate, share stories, and get to a deeper spiritual place. For the dancers who were stopped, and the community dances lost, we sincerely apologize.

We apologize that Friends wanted you, your ancestors, or your children to feel that your customs and worldview were wrong. It was wrong to believe that Western European worldviews and practices were superior to ones that you built with each other and the other living beings of your homeland for thousands of years.

We apologize for Friends who have not respected your ways of living and their participation in forcing a Western way of life upon you.

We have learned that worldwide thousands of indigenous children have died at boarding schools, including in the United States. We have heard from Alaska Native people that sometimes the families weren’t even notified when their children died. Many in our membership are parents and we can only glimpse the anguish this caused.

At the core of our Quaker faith is non-violence, founded on a recognition of that of God in every human being. It is hard to imagine how a practice that forcibly separated families, broke the bonds of language, and attacked and undermined cultural tradition could have been endorsed and pursued by people identifying as Quakers. Such behavior means that Friends actively denied and failed to see your full humanity.

We are painfully aware that the direct harms caused by our failure remain personal, cumulative, and ongoing.

We will do more than simply acknowledge the harm we have caused. We pledge to teach ourselves and our children about this wrong. We will formally and collectively ask ourselves what wrongs we may still be perpetrating in ignorance or bigotry. We believe there should be reparations and restitution for harms from the Boarding School system. We will actively identify reparations we can make while also advocating for them in broader society. Alaska Friends Conference endorses the formation of a federal Truth and Healing Commission on Indian Boarding School Policies and will continue to support Alaska Native rights, self-determination, and sovereignty.

It is not the responsibility of Alaska Native people to help us to transform our behavior. At the same time, we see that our acting without first listening has contributed to great harm. We seek your guidance and input to ensure reparations are done on your terms that will help your communities heal. We ask for forgiveness and pledge to walk beside you as we work together for healing and transformation.

Members of the Alaska Friends Conference

of the Religious Society of Friends (Quakers)

[i] In Alaska, this included the Mission School in Douglas in Southeast Alaska, which was established in 1888 by Quaker (Friends) missionaries sent by the Kansas Yearly Meeting of Friends.  The Mission School was both a school and orphanage.  Twenty-six Alaska Native children were in residence there in 1893.

In about 1896, the Mission School changed from a residential school to a day school for all ages, youth and adults.  According to Superintendent Replogle’s 1904 account, however, the “children whom Friends had already contracted for” remained residents at the school.  Friends also ran the government day school in Kake for a period beginning in the late 1880’s.

In 1897, Robert and Carrie Samms of California Yearly Meeting of Friends Church moved to the Kotzebue Sound area as Friends missionaries.  They and other Friends worked in partnership with the Bureau of Education to establish day schools in Kotzebue, Deering, and Noorvik that we know of.

[ii] When Friend (Quaker) Charles Replogle arrived in the summer of 1893 to become the new mission superintendent, Replogle discovered that the children in the Mission School were being punished with a strap and ferrule (wooden ruler).

Charles Replogle describes putting myrrh and capsicum into children’s mouths to punish them for “speaking Indian,” and said that method worked when other methods had failed.  A contemporary Native man described this technique as torture.