In Loving Memory of Joy Ganyo 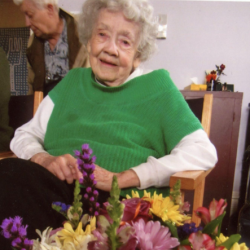 Joy Ganyo was born on December 7, 1930 in Warroad, MN--the second child of parents Levi and Marie (Reese) Ganyo. She graduated from Warroad High School in 1948 and enrolled in the University of Minnesota, Duluth where she majored in English and minored in speech and physical education. Joy went on to earn an MA degree in Speech and Theater from the U of M. Joy moved to Northfield, MN in 1983. While living in Northfield she established the Seven Gables Books and Antiques store, a treasure trove of old books and collectibles.

Joy’s work as a theater director for the Northfield Arts Guild between 1986 and 2003 was greatly appreciated by the Northfield community. Patsy Dew, former Theater Manager at the Northfield Arts Guild, shares the following memories: “Joy was a strong independent woman who valued honesty and directness. She loved the writing in classic dramas, understood intense human interaction, and helped amateur actors bring this to life on stage. She directed many dramas for the Northfield Arts Guild, including “Summer and Smoke,” “The Miracle Worker,” “Diary of Anne Frank,” “I Hate Hamlet,” “Steel Magnolias” and “All My Sons.” To expand opportunities for many to direct and perform, Joy championed the idea for a new program for the Arts Guild Theater called “Theater Afield,” in which many short pieces were performed in several different locations around town on the same weekend.”

The first mention of Joy Ganyo in the archives of Cannon Valley Friends Meeting was recorded at Meeting for Business on July 27, 1987. The Meeting decided it was time to create a Newsletter and Joy Ganyo volunteered to edit and distribute the publication. In the years that followed, she served as the Meeting’s Clerk and Co-Clerk and served on more than 11 different committees (most often for multiple terms) and in numerous individual roles. One member of CVFM recalls that Joy often challenged us on various issues, which led the Meeting “to think through them more thoroughly.” Joy represented CVFM as the Meeting’s representative to Northern Yearly Meeting for a number of years between 1992 and 2005 and especially enjoyed her work with NYM’s youth groups.

A member of CVFM recalls: “One of Joy Ganyo’s strongest commitments was to and for the youth of the Meeting. She directed the children in Christmas programs for years and was keen to help plan Easter celebrations, which usually included Spring poetry and pertinent quotes.” One of our parents remembers “Joy as a Friend who always made a special effort to reach out to our daughter, particularly at Christmas.”

Challenging injustice was another recurring theme in Joy’s life. In 1978-79 she was unfairly dismissed from her tenured position by a high school in Minnesota. Joy appealed this decision all the way to the Minnesota Supreme Court. The final ruling of the Court was that Joy’s dismissal was “unreasonable as a matter of law” and ordered Joy’s reinstatement in her position.

Joy Ganyo was just as staunch a defender in her pursuit of justice for others. In 2013 the Minnesota Legislature was considering a bill that legalized same-sex marriage. One Sunday Joy donned her purple-and-white “Quakers for Marriage Equality” t-shirt and stood outside one of the local Northfield churches--a church she had previously attended. As members left the worship service, Joy asked them to consider joining her in voting for marriage equality in Minnesota.

Another example of Joy Ganyo’s life-long quest for greater justice in the world can be found in the minutes from our May 2003 Meeting for Business. The last sentence reads as follows: “Joy Ganyo wants to talk about civil disobedience at some later time.”

Joy passed away peacefully in her room at the Benedictine Community in Northfield, MN on April 27, 2021 at the age of 90. We are grateful that Covid-19 restrictions were eased enough to allow two of her nieces and several of us at Cannon Valley Friends Meeting to visit her in her last days. Joy’s Care Provider, Mary Huiskes, who lovingly watched over her during Joy’s last years, was able to be with Joy on her next-to-last day. Mary reported that they were able to take a short walk and watch a televised baseball game that Joy thoroughly enjoyed. Joy is survived by one brother, David Ganyo, who lives in Nevis in northern Minnesota, and 17 nieces and nephews.

Joy Ganyo was an inspiration to many of us at Cannon Valley Friends Meeting. She loved animals (and raised champion Cairn Terriers), rode fearlessly through Northfield on her mobility scooter, challenged injustice and inequality wherever she encountered it, and enjoyed joining others from CVFM at “Alice’s Restaurant,” a weekly gathering for fellowship over lunch.

Joy may have been small in stature but she was mighty in spirit. She will forever have a place in our hearts.