In Loving Memory of LaNelle Olsen 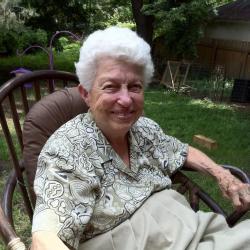 [Note: The following obituary was written by the Olsen family]

LaNelle Olsen, campaigner for peace and social justice, passed away March 6, 2019, at Three Links Care Center at the age of 89.  Those who knew LaNelle admired her energy, humor and positive outlook on life.

LaNelle was married at Des Moines Friends Meeting to Ken Olsen, who passed away June 28, 1986.  They were early organizers of Quaker meetings in Northfield, which often met in their home on Manitou Street.  She was one of the founding members of Cannon Valley Friends Meeting.  Contributions on her behalf for the Meetinghouse would be welcomed.

She is survived by her daughter Kirsten Olsen of Portland, OR; two sons, Andy of Northfield and Peter of Arlington, VA; and three grandsons, Roy, Dempsey, and James.

A memorial service celebrating the life of LaNelle Olsen was held in the manner of Friends (Quakers) on Monday, March 11th, at 2:00 pm, at the Cannon Valley Friends Meetinghouse (512 Washington St., Northfield, MN).  LaNelle's three children (Kirsten, Andy, and Peter Olsen) and three grandsons (Roy, Dempsey, and James) were joined by a number of current and former members/attenders from Cannon Valley Friends Meeting, as well as friends and neighbors from the Northfield community, and many others.

LaNelle Olsen touched the lives of numerous people, as evidenced by the tears, laughter, stories, songs, and experiences shared by those in attendance.  She will be greatly missed.