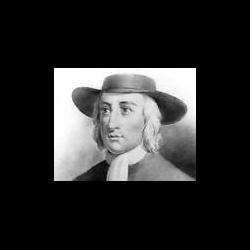 George Fox, founder of the Religious Society of Friends (Quakers)

Like many religions, Quakerism arose from a desire to refocus the existing religious establishment. For the Religious Society of Friends, this took place in 17th century England after the English Civil War.

In the early 1650s, George Fox (1625-1692), seen as the founder of Quakerism, arrived with an empowering message. He proclaimed the early preaching of Peter (Acts, 2 and 3) that Jesus, who had been present in the flesh, had risen from the dead and was come now in the form of the Light within every person.  This inner, egalitarian spirituality drew many dissatisfied with the tumultuous religious environment, and the message quickly spread. In America, Quakers cultivated this growing message.

Seventeenth century England mercilessly persecuted Quakers — killing many founders. Quakers also suffered persecution in pre-Revolutionary America.  The Boston Martyrs--two men and a woman--were executed by public hanging for their Quaker beliefs by order of the Massachusetts Bay Colony legislature between 1659 and 1661.  Other colonies in America were more tolerant of Quakerism.  Many of Rhode Island's early governors were Quakers.  Pennsylvania was founded by affluent Quaker William Penn in 1682 as a state run under Quaker principles.

The steadfastness of persecuted Quakers in England and America helped win tolerance of all religions. By 1700, Quakerism entered a period of peaceful recuperation and regrouping.

Quaker meetings of the Friends General Conference (FGC), including Cannon Valley Friends Meeting (CVFM), tend to practice an unprogrammed meeting format. Meetings of the Friends United Meeting and the conservative Evangelical Friends International have taken on the programmed format more similar to other Protestant services — being led by pastors.

Quakerism has spread internationally since its founding with an estimated 300,000 Quakers throughout Europe, Asia, Africa, Australia, and North and South America today. About one third of all Quakers live in the United States and Canada.