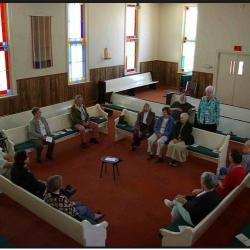 We are the Quaker meeting in Carlisle.  Think William Penn and the Quaker oats man.  Or Gary Cooper in the movie Friendly Persuasion.  That is our heritage.

If you are wondering, "Are they Friends or are they Quakers?" we are both.  Our colloquial name is Quaker; our official name is the Religious Society of Friends. We use the terms interchangably.

For those who don't know anything about Quakers, there are two things that are unusual about us.

First is silent worship.  Silent may not be entirely accurate.  We do begin and end with silence.  We have no designated or paid minister.  But the silence is occasionally interrupted and hopefully deepened when one of us feels they have a message that they need to share with the group.  Anyone so led is welcome to do so. We call it the free ministry, but that's no reflection on its value.  Messages are usually brief.  Our Sunday meetings usually last about an hour.  That can seem like a long time if you're not used to sitting in silence.  For some people it's like finding home.

And it's oh so different than sitting in silence alone, although we have a hard time explaining why.

Most of us in Carlisle came to Quakers as adults.  Some of us are refugees from other religious groups.  Sometimes people are attracted to Friends because we don't have any creeds or require that members assent to a particular set of beliefs.  In place of belief we rely on a touchstone of truth we find in our own hearts ("Did our hearts not burn within us.").  We feel that it is more important that a person be faithful to the truth in their heart than that they ascribe to a particular statement of faith.  This is sometimes referred to as the "Inward Light."  There are other names, most of them borrowed from the Bible.  The names are less important than the experience.  It's our version of what other Christian groups refer to as the work of the Holy Spirit.

Our meeting is fairly small and perhaps for that reason we are fairly close, like an extended family.  We average about 20-30 people for a typical Sunday meeting.  Some people attend regularly; others occasionally.  We are part of larger organizations - Warrington Quarterly Meeting, Baltimore Yearly Meeting, Friends General Conference, and Friends United Meeting - so ostensibly someone is keeping an eye on us so that we don't wander too far off the Quaker path.

By Quaker standards we are a fairly new meeting.  While our roots go back to the 60's, we became an official meeting in the late 80's.  Some of those original members still attend.  In contrast, neighboring Menallen Friends Meeting near Gettysburg has been in continuous operation since before the Revolutionary War.

Historically Quakers arose out of the English Revolution in the 17th century.  Some people consider us the radical wing of the Puritan movement.  What was radical about us in the context of Puritan uncertainty is that we said that God does speak and in such a way that it enables us to do his will.  As you might expect, we offended a lot of people.

Historically, Friends dressed plain and used a quaint way of speaking, full of thees and thy's.  Perhaps because we value simplicity, we don't do that anymore.  But we should warn you that you might feel out of place if you wear a suit to meeting.

The other thing that people wonder about Quakers is "Do you have to be a pacifist?"  Refusal to serve in wars and non-violence is certainly part of our history.  And there are certainly people in our Society who have set a sterling example.  But in practice we are mixed.  After all, Herbert Hoover and Richard Nixon were Quakers.  Again, while we don't believe that truth is private, we are more interested in people being faithful to the truth in their heart than that they pass a litmus test about non-violence or any other form of political correctness.  If people are faithful to the truth that is there now, more truth will follow.  We come to meeting expecting to be surprised and changed.