Quakers - The Quick Version of Who We Are 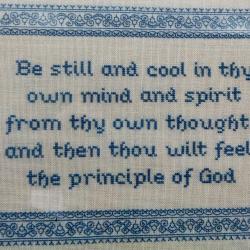 Gathered in 1662, Dover Friends Meeting is the second oldest congregation in the city.  We have members living throughout the Seacoast Region of New Hampshire and southern Maine.

The Society of Friends, or Quakers, emerged during the religious, social, economic, and political upheavals of the mid-1600s in England.  The movement quickly spread to New England, where it was severely persecuted. Even so, a third of the families in colonial Dover soon became Quaker.

Our worship is conducted without a pastor or a choir.  There are no outward symbols of religion—no cross or crucifix or stained glass windows.  We sit in silent meditation; the hour may pass completely in deep individual contemplation.  More often, a few Friends will stand and briefly deliver a message arising from the silence.  This is not a time of discussion, but of sharing and encouragement and deep refreshment.

Friends have understood church to refer to people, rather than an institution, building, or service of worship.  As a result, we, as a people of faith, meet. We go to meeting, rather than to church.  We gather in a meetinghouse, rather than in a church. (Sometimes we meet in other places, as well.)  To meet is who we are as a body of the church as well as what we do.

We are a diverse congregation, ranging from infants through well-seasoned adults.  Our professions include teaching and social work, medicine, science and technology, the fine arts, farming and sailing, broadcasting and journalism, firefighters and carpenters, librarians and students.  Many of us garden and compost, although it’s not required.

The name “Friends” comes from John 15:14–15, where Jesus says, “I have called you friends.”  And “Quaker” originated as a term of derision, either from the emotional reaction of early Friends in worship or from their rejoinder in front of a judge, when they said, “We quake only before the Lord.”  In the early days, we were also known as Children of Light or Seekers After Truth.