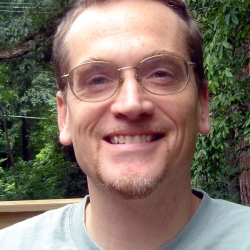 As of a few years ago, my only experience of Quakerism  -- other than a few pleasant weekends at PFF (Piedmont Friends Fellowship, http://www.rtpnet.org/friends/PFF.htm)  --  was Durham Friends Meeting.   I had found a wonderful, loving spiritual home and community here, but I wanted to know more.   There were aspects of Quakerism that seemed too good to be true.  I was afraid that I might have made them up – read into Quakerism what I wanted to find.

So I decided to broaden my scope.  I started by reading books in our Meeting library, and then got really hooked.  I ordered histories and anthologies from FGC (Friends General Conference, http://www.fgcquaker.org/ ); even read books on the intellectual history of the Puritan movement.   Yeah, turns out I’m that kind of Quaker.

But my explorations were not limited to books.   The Internet, it turns out, is a great tool for helping Friends expand beyond their own backgrounds.  And, in the early 2000’s, Friends from many different Quaker traditions were discovering each other online, through sites such as quakerquaker.org.   Each Friend seemed to be seeking in other Quaker traditions something that was missing from his or her own.

Strangely, the greatest enthusiasm by far – whether from pastoral (Friends United Meeting, FUM, http://fum.org/ ) or liberal (FGC) or evangelical (EFI, Evangelical Friends International, http://www.evangelicalfriends.org/240 ) Friends – was focused on that tiny “fourth branch” of US Quakerism, the Conservative Friends.  (There was such an intense interest that some Conservative-curious Friends even took to calling themselves “Con-vergent” Friends.)  I discovered that these Conservative Friends are represented by just three yearly meetings:  Ohio YM, Iowa YM, and… North Carolina Yearly Meeting-Conservative.

“Hey!” I thought.  “I think that might be us!”  Not that I really knew for sure: after all, there were two North Carolina Yearly Meetings.  It turns out that the original Yearly Meeting split in 1903 between those who wanted pastoral meetings, programmed worship, and more theological conformity (now the FUM affiliate NCYM) and the handful of meetings who wanted to preserve the creedless, unprogrammed Quaker tradition.  Those meetings eventually morphed into the eight monthly meetings that now (along with a number of worship groups) make up North Carolina Yearly Meeting-Conservative (NCYM-C): Davidson, Friendship, West Grove, Fayetteville, Wilmington, Rich Square, Virginia Beach and Durham.

I was intrigued enough to visit the NCYM-C website.  There I found the first three issues of the Yearly Meeting Journal.   Within those issues, I found voices and ideas (including those that Lloyd Lee Wilson incorporated into his influential books about the Conservative tradition, The Quaker Vision of the Gospel Order and Wrestling with Our Faith Tradition) that spoke deeply to me.

I was interested enough to ask some veteran members of Durham Friends Meeting to tell me about Yearly Meeting.  The typical response was a slightly funny smile or laugh, as if they were thinking of a deeply beloved, but somewhat eccentric, great-aunt.  “It’s a very special group of people” I often heard.   I was relieved to learn that “Conservative” didn’t mean politically or even socially conservative: it referred to conserving the best of the original, unprogrammed religion of Friends.  And I learned that there were some members of Yearly Meeting who practiced “plain dress” and even “plain speech” – although they were not typical even of Conservative Friends.

Eventually, I was so intrigued that I decided to check out these beloved/eccentric, conservative/liberal, plain/fancy people by attending Yearly Meeting annual sessions.  What with the plain dress and speech, it might even be a bit like Colonial Williamsburg.

This is how, in July of 2006, I ended up at tiny, under-funded Chowan University in Murfreesboro, NC.  There, where I found about 50 Friends meeting in a very utilitarian space below the student center.   I was a bit disappointed to find that they mostly looked, talked and acted just like Friends at Durham Meeting.   And I was especially disappointed to find out that the annual session was really just one long Business Meeting.  But over the course of the next few days, I learned that even business could be a loving thing if done in a thoughtful spirit of community.  We spent several hours a day in a remarkably supportive and worshipful approach to Quaker process, all of which was bracketed by meals and evening events full of fellowship and conversation.

I fell into this slower, more deliberate pace much more easily than I would have predicted.   Here was a spiritually empowering vision of Quaker community rooted in mutual accountability that grew naturally out of what I had already learned at Durham Friends – and confirmed for me that I had not made up the good parts of Quakerism.  Here was a Christian tradition firmly planted in America that was very much in tune with the mysticism and openness I so valued in Eastern spiritual traditions.  The last day of annual sessions featured sweet, deep worship on the benches of historic Rich Square Meetinghouse in the village of Woodlawn – followed by homemade lunch, pies and watermelon on the lawn.  It was if I had fallen in with a group of Zen Amish.

Since then, I’ve attended all or part of six annual sessions.  I’ve helped produce two issues of the Yearly Meeting journal, and I currently serve as one of our two DFM representatives to Yearly Meeting.    Along the way, I’ve gotten to know a dynamic community of open, loving people.  You can see its spirit in the sweet goofiness of Sid Kitchens; in the teaching gifts of Deborah Shaw; in the ever-present smile of Bob Gosney; in the wisdom and strength of Louise Wilson; in the faithfulness of Mary and Richard Miller; in the way Lloyd Lee’s eyes twinkle during a theological chat; or in the energy of younger people such as our own Emily Stewart who grew up with Yearly Meeting.

And I’ve discovered that the relationship of the other Monthly Meetings to Yearly Meeting is quite different than Durham’s.   Many are small and isolated.  Often, Yearly Meeting and Representative Body (a sort of quarterly meeting) represent one’s only opportunity to give and receive support beyond one’s own monthly meeting.  Opportunities for socializing with other Quakers – much less for a youth or child education program – are quite limited.  Durham alone has more youth and children than all of the other monthly meetings in Yearly Meeting combined.

Despite its tiny size, our Yearly Meeting attracts people from all over Quakerdom to its annual sessions each July.  And at the 2012 World Conference of Friends in Kenya, there was great interest in Conservative Friends.  If you were to ask me how the approach of our Yearly Meeting differs from those of Liberal (FGC) Friends, I would say that the differences are not huge. While the members of our Yearly Meeting – like those of many FGC meetings -- are quite comfortable with the Bible and with “Christocentric” language, they have no problem with other forms of expression.  In fact, most Christians would probably consider NCYM-C – which supports Quaker House and which has no problem with same-sex marriage -- to be theologically (not to mention politically and socially) quite liberal.

Conservative Friends do, however, see Quakerism as an essentially religious – not social, political or philosophical -- practice; for them, social action is always an expression of the spiritual, always flows from one’s relationship with the Divine.   What makes Conservative Friends special, I think, are the following:

•         A willingness to place one’s relationship with the Divine at the center of one’s life.

•         A willingness to see the Meeting community as a loving, supportive mechanism for sustaining and enriching that spiritual relationship.

•         Faithfulness to each other in maintaining as a living wellspring -- and not just conserving as a historical relic -- a vision of centered Quaker community that still has resonance today.

If you want to know more about North Carolina Yearly Meeting – Conservative, visit the website at http://www.ncymc.org/ , where you can sample the Meeting journals and other material.