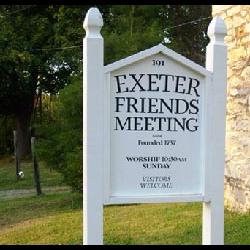 Our Roots in Time and Place

It was 1718, just 36 years after William Penn arrived in Pennsylvania, that a group of Welsh Quakers settled in the Oley Valley. Germans and Swedes were already settled here, they had come in before the land had been properly purchased from the Native Americans.

Soon Irish Quakers took up land along the Maiden Creek north of present-day Reading. Both groups of Friends built log meetinghouses and held meetings for worship on Sunday and in the middle of the week. These pioneers were under the care of Gwynedd Monthly Meeting near Norristown.

By 1737 they were granted monthly meeting status (called Oley Monthly Meeting) and could take responsibility for decisions in regard to membership, marriages, property, etc. At their first monthly meeting for business held in June of that year, they sent a minister, Jane Ellis, traveling in the love of the Gospel to visit Friends Meetings in Maryland and Virginia.

In 1742 with the establishment of Exeter Township, the meeting changed its name to Exeter Monthly Meeting. By this time the minutes report the need to build a meetinghouse for Quakers settlers in Robeson Township south of Reading. These meetings, Exeter, Maiden Creek and Robeson met alternately at Exeter and Maiden Creek for monthly meetings for business and discipline.

With the start of the French and Indian War in 1755 Friends were required to assist “members of this Meeting (from northern Berks County), who have left their Habitations on account of the Indian Enemies.” In September of 1757, eight adults and 16 children were reported as in need of assistance. The meeting in Reading, first mentioned in 1756, was under care of Maiden Creek Friends. In December of that year Friends in Pottstown began meeting regularly in the home of Jacob Thomas, they were attached to Exeter Meeting.

The American Revolution was a difficult time for Friends, in the minutes of their business meetings they refer to the war as “the current unsettled state of public affairs.” Besides refusing to serve in the militia or fight, Friends felt they should not pay taxes that would provide money to prosecute the war. In lieu of unpaid fines and taxes the sheriff would seize goods and livestock. One Friend reported the sheriff had taken four sheep, a colt, a yoke of oxen and the yoke, a heifer and a three-day clock.

Early in the 19th century controversies developed among Friends over issues in theology and governance and in 1827 Philadelphia Yearly Meeting, of which Exeter was a part, divided into those called Hicksites and those called Orthodox. Most Exeter Friends stayed with the Orthodox and most Reading-Maiden Creek Friends chose the Hicksites. This division ended in 1955 when the two yearly meetings, both called Philadelphia Yearly Meeting, united.

In 1949, some Friends having moved into the neighborhood, the meetinghouse was reopened 50 years after being "laid down" in 1899. In 1956 Exeter Monthly Meeting was reestablished as a part of Philadelphia Yearly Meeting of Friends.