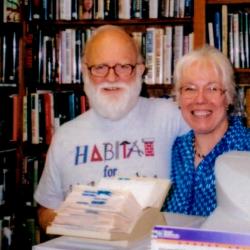 With sorrow we announce the death of Phil Haisley. Born Apr.14, 1934, Phil grew up in Marion, Indiana. His first job was as Quaker minister to two small churches. At 19, he married his 16-year-old girlfriend. Two years later they had a son, Mark. Phil taught for a while in California, then when he and his first wife split up, Phil took Mark to Kenya where he taught in a Quaker school and initiated a program to integrate the school and encourage village children to enroll.

When Phil and Mark returned to the US, Phil pursued a PhD in African-American literature. He held a variety of jobs in this period: bodyguard, lifeguard, drive-in theater director, then teaching school while working second shift at GM’s Fisher Body plant. His PhD advisor’s sudden death derailed Phil’s PhD. But his teaching career was extensive, including all levels from 1st grade to grad school, teaching English, French, Spanish, and teacher ed classes. He taught at Queens College and spent two years teaching in Australia.

Phil met his second wife, Anne, in New York. They had a long relationship with Phil and Mark living in Indiana while Anne and her son Chris, from her first marriage, lived in Locust Valley, NY, where Anne taught school. Whenever possible, the two families enjoyed camping and traveling together.

In the mid-70’s, Phil opened Redbeard’s Books in Marion. (Back then Phil had a red beard and full head of red hair.) The bookstore hosted chess, D&D, and Scrabble tournaments, and Phil became an International Scrabble master.

During the Reagan Administration, Phil joined Witness for Peace (www.solidaritycollective.org) to stand with Nicaraguans being murdered, maimed, and intimidated by US-funded Contra death squads attempting to overthrow the democratically-elected Sandinista government and hinder its promotion of mass literacy, universal healthcare, gender equality, and nationalization of resources so wealth derived therefrom would flow more to the people and less to American corporations. Phil and other witnesses lived in war-zone villages to deter and bear witness to attacks. On Phil’s return, he & Anne together continued to support this effort and offered sanctuary to refugees.

In 1989, Phil & Anne moved their bookstore to Gainesville, Florida, under the name Books, Inc. They added to the premises Book Lover’s Cafe, the first all vegetarian restaurant in Gainesville, and an art gallery featuring a local artist each month.

Recently, Phil & Anne caught CoViD. Their son Chris cared for them at home until Haven Hospice helped make Phil more comfortable during his final day. Anne also seemed to be losing the battle to CoViD, but after participating in the clinical trial of an antibody infusion, Anne is now virus-free. Chris had volunteered in the trial of Moderna’s RNA vaccine, and received vaccine rather than placebo, so was able to care for Phil & Anne without getting ill. Phil is survived by wife Anne, brother Jerry, son Chris Warren-Boulton, daughter-in-law Cathryn Albrecht, and granddaughter Wylie Warren-Boulton.

Anne requests that in memory of Phil you pray for world peace, and push to prevent and end wars and sanctions that are killing and immiserating our brothers and sisters around the world.