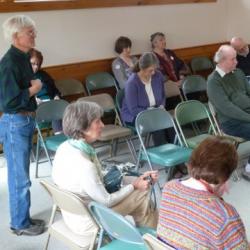 What Quakers Believe—From Our Historical Roots to Today

In the 1640’s a young Englishman named George Fox was troubled by the disconnect he felt between his spiritual longings and the church practices of the day.  He sought answers by traveling throughout England to various churches and talking with others.  During a transformative experience  he felt his own, direct connection to God.  This epiphany led him to look for “that of God” within and to seek God in a lived experience rather than in a church or mediated by a priest or pastor.  Each person could be guided by what Fox referred to as an “Inner Light.”

Fox spoke of his experience to others.  His words affected some deeply and engendered in them a new attitude toward religion.  They sought to support one another by forming an informal society, not a “church.” They spoke of themselves as “Friends of Truth'' or just “Friends.”  They believed that each person has “that of God'' within and so treated all people as equals.  They worshiped together by sitting in silence and speaking when moved to speak from a spiritually-centered place.  They did not promote a creed or dogma, but rather believed that the Truth was continually being revealed.

When Fox died in 1691, there were many gatherings of Friends, also known as Quaker Meetings, in England and some in America.

Today there is a wide spectrum of worship and practice among Quakers worldwide.  Quakers seek to respect and treat all persons as equals, regardless of race, gender identity, sexual orientation, religious beliefs or social status.  We aim to understand the root causes of violence and to work non-violently to change the conditions that have caused conflict or injustice.   We are called to witness for peace and stewardship of our planet. We attempt to live our lives as closely as possible to our beliefs and to “let our lives speak.”

Testimonies are what Quakers call the ways we have found to live and act based on our beliefs.

For more information about Quakers and our beliefs and practices, please refer to the Friends General Conference website: https://www.fgcquaker.org/discover/faqs-about-quakers#start