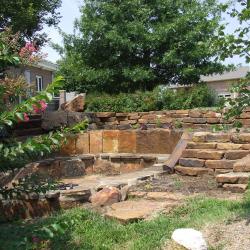 THE STORY OF HEARTLAND FRIENDS MEETING

Heartland Friends Meeting grew out of a deep concern that the simplicity and power of unprogrammed Quaker worship touch many lives,  unencumbered by bureaucracy.  For many years a few Friends gathered in various settings for unprogrammed  worship at University Friends Meeting in Wichita.  Dan Neifert  was a faithful and sometimes the only attender keeping records of those present.  As this group  touched the Spirit some felt a desire for a more nurturing setting.

While attending the 1986 Missouri Valley Conference of Friends, Dean and Angela Young felt  moved to deepen their worship experience in Wichita.  They visited with James and Bobbie Hamilton, Wendell Hendrick, and Mike and Muriel Hopkins at the conference to gauge interest.  The Youngs moved forward, with Angela securing a meeting space for an independent Quaker worship group at the Peace House, 1407 North Topeka Street in Wichita.  Attenders of unprogrammed worship at both University Friends Meeting and Friends University were invited and encouraged to participate along with interested community members.

The group first met at 11:00 A.M. on First Day, Ninth Month, 1986.  Regular contributors included  Dorothy Troutman, who moved to Wichita from 57th Street Meeting in Chicago, Dan Neifert, Carey Foster, a Friend and student from Wyoming, Gail Thompson, Ray Woodard, a Friend and  student from Montana, Wendell Hendricks, the Hamiltons, the Hopkins, and the Youngs.

The group deepened and began forming its own identity.  The name Heartland Friends Meeting  was chosen and Dean Young served as the first clerk of the meeting.  In an effort to accommodate individuals wishing to attend University Friends Meeting morning services the meeting time was changed to 1:30 P.M.

During Second month 1989, at Dan Neifert’s suggestion, Friends experimented with holding weekly meetings for worship in members homes. Friends returned to meeting at the Peace House.   To accommodate older Friends needing better access to the meeting, in the Fall of 1989 meetings for worship were moved to a basement room with no physical barriers in St. Paul's United Methodist Church.

Attendance grew and the meeting continued to mature and structure itself.  Dorothy Troutman was chosen to clerk the meeting and officers were chosen for various responsibilities.

In Third Month 1990 Heartland Friends Meeting became incorporated under the laws of the State of Kansas as a non-profit organization.  In Sixth Month 1990 Heartland was warmly accepted into full membership of Nebraska Yearly Meeting.  Heartland's desire to fully associate with a wide spectrum of Friends led it to seek membership as an at-large meeting in Friends General Conference also.

Over the years the meeting has developed and maintained close and continuing relationships with a number of local and regional groups which have nourished and broadened the life of the meeting:  Wichita Interfaith  Ministries, the Peace and Social Justice Center of South Central Kansas, Wichita Friends School, Nebraska Yearly Meeting (now Great Plains Yearly Meeting), the Missouri Valley Friends Conference, the Friends of Jesus Community, an unprogrammed worship group at Northridge Friends Church and a variety of others.

Children who have attended Heartland Meeting have learned in First Day School  about historical Quaker figures, Quaker art and artists, Native American issues, and Friends values and heritage along with traditional Bible stories and have enriched the meeting with various programs and projects.  Heartland Friends welcome and cherish children who attend and seek ways to enable youth to broaden their life experience.

Wichita Friends School began classes in 1991 developing its community of teaching and learning first at the Aldersgate Methodist Church in Wichita and later purchasing its own building on West  Highway 54.  The years of 1993 and 1994 were ones of increasingly close involvement and interaction between Heartland Friends and the school.  In the summer of 1994 Heartland Friends moved the location of their weekly meeting for worship from St. Paul's United Methodist Church to the Wichita Friends School building at its present site.

In 1996 serious discussion began of acquiring land near the Wichita Friends School to raise a dual-use building that could be shared with the school.  A scale model of a meetinghouse  was  made, and a sawmill party at the Perkins Ranch was held to cut walnut for the proposed meetinghouse.  For the following seven years "the meetinghouse" would provide a continuing theme and central focus for Heartland Friends deliberations during meeting for worship with attention to business.  In November 1998 Heartland Friends anticipated the completion of the new meetinghouse by August 1999.

The present site was selected in January 2000.  Ground was broken June 2001 during the gathering of Great Plains Yearly Meeting of Friends at Wichita.  In January 2002 the final building permits were obtained.  Heartland Friends have invited friends, neighbors and well-wishers to join us Fourth Month Twelve and Thirteen, 2003,  in a celebration of the renewed commitment of our faith community that completion of the meetinghouse represents and in the meeting for dedication.

Heartland Friends have welcomed numerous Friends who have touched our small meeting.  Each one contributed to our life together.  Some were able to stay and others were called to further travels as the regular attenders changed. The meeting's neighborhood includes a eighty-mile radius around Wichita.  Regular members and attenders now come from Kingman to the west, Newton to the north, Howard to the east and Wellington to the south, as well as from  Wichita.

Throughout many transitions and the  focus on a new meetinghouse during the last few years, Heartland Friends have remained faithful in providing seekers with an opportunity to experience Quaker  worship, wait in the Light and find God's love. We have shared times in which our faith was strengthened and reinforced.  We have communed with God through life and the loss of life and the helping hands of our neighbors.  We have shared times of freedom to embrace our faith and been challenged to reach out to help those in need and witness against injustice.  We seek for God to be present in us, as we have seen God present round about us, and to follow the leadings that we receive in waiting worship.