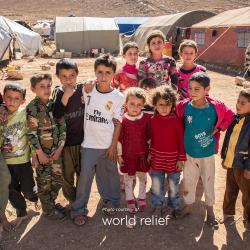 Join Us For a Potluck Dinner and Discussion - All Are Welcome

More than 10 million Syrians are currently displaced from their homes due to the civil unrest and violence.  That is about half of the total Syrian population.  4.5 million are officially registered as refugees. An additional 2 million refugees live unofficially in refugee camps in neighboring countries.  About 4 million people are displaced within their country.

Join us and learn about the Syria refugee crisis and how you can help.  We will hear from two leaders of organizations that are helping Syrian refugees in a variety of ways.

Lina Sergie Attar.  Lina is the co-founder and CEO of Karam Foundation. She is a Syrian-American architect and writer from Aleppo. Karam Foundation was founded in 2007 in Chicago. They started with a food drive on the south-side of Chicago. Today, their impact expands across Syria, Turkey, Lebanon, and Jordan, building a better future for thousands of Syrian families.

Suzanne Akhras Sahloul. Suzanne is the founder & president of the Syrian Community Network. The Syrian Community Network (SCN) was established by a diverse team of community members with intentions to aid and to assist in easing the resettlement of Syrian refugees. Their mission is to empower Syrian refugees in achieving a seamless transition and relocation to the United States through connecting people to the right services and support networks.