Another Quaker Author: When They Speak Israel 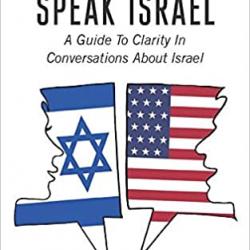 After much research and personal experience, he realized that people have different perceptions of Israel’s history and different understandings of today’s reality. Since the United States is intimately involved with Israel and Palestinians militarily, financially, and politically, McDonald believes it is important for Americans to be able to talk about the issues.

Unfortunately, Americans are losing a lot by not having these conversations. Israel has been the largest recipient of US foreign aid. The US military has reported that US support for Israeli policies hurts our anti-terrorism efforts. In recent decades, the United States has also defended Israel with most of its UN Security Council vetoes, protecting Israel from condemnation for its human rights violations.  We have gone so far to protect Israel that we have passed state laws to limit free speech and how we teach world history to American children. To have a healthy democracy, Americans need to be able to discuss issues that affect our pocketbooks, our safety, and especially our rights.

When They Speak Israel bridges the gap between people who are concerned about Israeli policies and those who defend Israel’s actions. Use the tips in this guide to avoid stepping on conversational mines, to develop listening skills, and to build understanding relationships.