Not a Cozy Belief 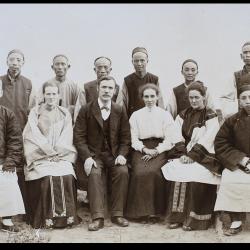 The following passage was used to open business meeting on 9/11:

Lucy E. Harris (1873-1962) became a doctor and went to practice medicine in China. No situation daunted her…. Her utter fearlessness in dealing with difficulties sprung from her deep faith in God; not a cozy belief that nothing dangerous would happen to her, but a firm belief that in whatever did happen she would have the presence of God with her….

She once encountered two warlords with their followers lined up on each side of a river. Lucy, a tiny, slightly built woman possessing a firm, strong, clear voice, stood in a boat in the middle of the river, shouting to them, insisting they stop their fighting and go their separate ways. They turned themselves about and went.

—Based on information from Hereford and Hitchin Monthly Meeting, 1961

Photo Credit: Kester Harris, https://www.hpcbristol.net/collections/harris-lucy (Lucy Harris is in the front row, second from the left)