The Power that Lies in Being 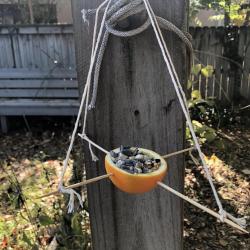 The passage shared in meeting for worship on November 13 was from Stephen G. Cary:

In all our fervor – in all my fervor – to be doing, have I paid too little attention to the power that lies in being? Do you remember that is the spirit of our service, the aura that surrounds it, the gentleness and the patience that marks it, the love made visible that compels it, that is the truly distinctive quality…?

Several messages were shared, audible in the First Day School room through a Zoom connection, where a bird house was being painted and biodegradable bird feeders were being filled with birdseed.

Born in 1915 to a Philadelphia Quaker family, Stephen G. Cary led a life of spirit, courage, and action. A conscientious objector during World War II, Steve co-led the American Friends Service Committee effort to help rebuild Europe after the war, served the AFSC for six decades, and participated in civil disobedience throughout his life. He returned to his alma mater, Haverford College, as vice president and interim president and played a major role in shaping the College's identity as a coeducational institution faithful to Quaker values.

Despite a life of great accomplishment, Steve would rather have been described as a family man, adventurer, fan of Haverford, and storyteller. Through his peace work and leadership in Quaker education, Steve helped shape the changes in Quaker thought in the twentieth century.