Some Remembrances of the Religious Society of Friends (Quaker) in New Paltz, New York 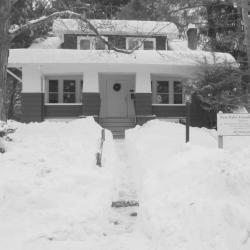 Keith and Ruth Smiley, and the Reverend Gerret Wullschleger, minister of the Reform Church on Huguenot Street, felt it would be important to have a Quaker Meeting in New Paltz. So it began when the Smileys and the minister and a few others met in the undercroft of the big church, in about 1953. Many venues embraced the Quakers in the nearly four decades that followed: Elting Memorial Library, a classroom at the college, the basement room in the bank on the corner of Main Street and Mannheim Boulevard, Mountain Laurel School, and Plutarch Methodist Church, a Civil War-era building several miles from New Paltz.

When a member died on December 1, 1990, the Meeting learned that she had bequeathed her home to them, but Jeanne Rosenfeld Hall had stipulated that the house must become a meeting house. The wandering Quaker tribe desired a permanent place, though aware that owning and maintaining property would entail many responsibilities.

Laura Zeisel, a lawyer representing Jeanne Hall's estate, met with the Meeting. She outline the steps and obstacles in obtaining a "special use permit" from the New Paltz Village Planning Board. Undaunted, Jane Rittenhouse Smiley and Duty Hall became fund raisers. Meeting property inherited from Irene and Carleton Van de Water had to be sold. Application for a grant was made from the Building Fund of a Quaker organization.

An active member of the Meeting was a partner in Winter Sun Construction, which specialized in renovations. Winter Sun's bid was lower than another company's. Fortunately for the Meeting, the construction company was familiar with the various kinds of regulations and permits needed in order to remake a home into a public space. But before Sally Stites-Robertson and her business associate Dan Guenther could begin work, the house at 8 North Mannheim had to be cleaned out -- a house with an attic and a basement crammed full; a house with 45 years of receipts, canning jars, old magazines, slides, broken chairs, and more. Nothing, it seemed, had ever been discarded, including a heavy old organ. Jane Smiley, through diligent effort, found someone who wanted to buy it. Did Friend Willie Yee handle the finances of this whole enterprise?

Winter Sun began its work in the spring of 1991. The basement floor had to be dug up and replaced. Walls on the main floor, dividing it into four rooms, had to be taken down to make one large space for Meeting. Long steel beams came through opened windows. Volunteers did what they could do, patiently directed.

Meeting discussions wrestled with the details: signs, kinds of floors and floor coverings, dishwasher or not, literature in the meeting room or not, the parking problem, landscaping, large tree limbs over the roof, and accessibility.

On October 6, 1991, the first Meeting in its new home was held. Neighbors crossed the threshold. Lee Moore of Cornwall Meeting was present. Bob and Kay Bacon from Old Chatham Meeting came.