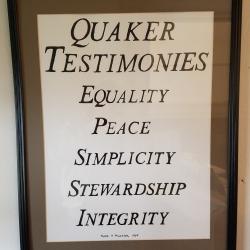 The Quaker Faith, also called the Religious Society of Friends, is about 350 years old. While not all Friends have exactly the same beliefs, there are some basic foundations to the Religious Society of Friends. These "foundations" are called testimonies. Some consider Quaker testimonies to be are radically counter-cultural as the testimonies challenge the values of our current society which seems to be based on greed, distrust, violence, and oppression. The Quaker testimonies are rooted in love for God and one's neighbors.

Integrity means that we endeavor to behave and speak so there is no lapse between what we believe, what we say, and what we do. This means that Friends work at learning and discerning the truth of our own hearts and speaking that truth at all times. Friends traditionally do not take loyalty oaths or swear on a bible in court. We do not believe that there should be one truth for court and one truth for every day.

The Quaker understanding and implementation of simplicity has changed over time. Early Friends opposed luxury and waste. Simplicity used to mean a code of plain dress and speech, such as plain grey dress and the use of the words "thee" and "thou". Eventually that practice was deemed by many Friends to be "quaint" and set Friends apart from the greater society and those practices were dropped. Today, many Friends are returning to notions of simplicity that eschew excessive material goods, abundance, and waste. A more simple life is one that enables one to keep the Divine at the center. Friends see simplicity as linked with a commitment to care for the environment, for each other and for God's creatures.

Since Friends believe that every person has a spark of the Divine within them we emphasize that all people are equal before God. We welcome to our community and worship all persons regardless of gender, sexual orientation or expression, race, or religion. The belief that all persons are equal before God has been a foundation of Quaker leadership in many movements for equal rights a variety of groups of people. Women were long considered the equals of men in Quaker Meetings for Worship and Business Meetings. Friends were also leaders in the movement for humane treatment of those with mental illness, those in prison and on death row. Most recently Friends are in the forefront of the movement for equal treatment for gay, lesbian, and Trans-gendered persons.

As Friends believe that every person has a spark of the Divine, Friends are opposed to the taking of life, even in times of war or civil strife. The Friends1 original refusal to bear arms has been broadened to embrace protests and demonstrations in opposition to government policies of war and confrontations with others who bear arms, whatever the reason, in the support of peace. The Peace Testimony does not mean that Quakers believe in passive resignation; in fact, we believe in and practice passionate activism. It does mean that Quakers believe that nonviolent confrontation of evil and peaceful reconciliation are always superior to violent measures. Because of this core testimony, the Religious Society of Friends is considered one of the traditional (historic) peace churches.

Friends attempt to live by our testimonies. Much of our "ministry" is carried out within our families, places of work, and through our community involvements. Over the years, Quakers have worked for prison reform, the abolition of slavery, women's suffrage, an end to the death penalty, civil rights, right sharing of the world's resources, stewardship of the earth, peaceful conflict resolution, religious liberty, and have advocated for alternative service for those whose conscience forbids them to kill others in war. Quakers have ministered to the needy, especially victims of war.

Friends seek to create a welcoming community in their meetings and hope to influence the wider community to become one as well. Friends have long held that our belief that there is the light of the Divine (God) in each of us will help us achieve community or unity. Quakers have expected our common belief in the inner light to lead us in the same direction and toward the same goals. We believe in "continuing revelation" which means that Friends believe that God is still in communication with us. This is part of the ongoing spiritual journey that many Friends find is part of their daily lives.