George Clymer and His Quaker Connection 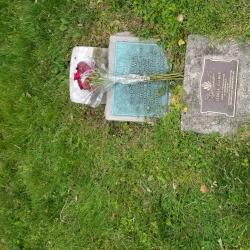 George Clymer Grave with flowers left by an unknown visitor

George Clymer and his Quaker Connection

George Clymer, signer of both the Declaration of Independence and the Constitution, is buried in our Meeting’s yard.  As told to me, the Meeting’s handed-down verbal story states that he was not a Quaker, but was visiting his son in Trenton in the winter when he died.  Although he lived in Morrisville, he had to be buried in Trenton because the Delaware River could be crossed then only by ferry.  This story is in error.

In looking into George Clymer’s connection with our Meeting, I was intrigued by a recent article, “Madeira, Quakerism, and Rebellion,” by David W. Maxey.  (Quaker History, vol. 93, no. 2) The article does not answer my question, but provides background information to Clymer’s life. The article’s lead subject is Henry Hill, a Philadelphia Quaker who made a good living importing Madeira wine from the Caribbean.  He built himself a mansion, still standing today, known as the Physick House, on Fourth Street between Spruce and Pine.  (The name comes from its second owner, Philip Syng Physick, the father of American surgery.  His surname does not indicate his occupation; it is apparently a mutation of “Fishwick.”)

Henry was a birthright Quaker who attended Meetings wherever he went, and considered himself to be a Quaker, but apparently never became a member of any specific Meeting.  His wife, Ann Meredith, another birthright Friend, was disowned by her own Quaker Meeting when she married Henry in the Christ Church of Philadelphia.  Disownment proceedings had begun before the marriage, supposedly because she attended stage plays and “in her Dress and Address [did] not appear[…] as a Friend.”  But when she and Henry exchanged vows in the Anglican Christ Church in 1773, disownment was inevitable.

Ann’s father, Reese Meredith, was a rich merchant, who had made his fortune in real estate and shipping.  He was a “nominal” Quaker.  He had two children, Samuel and Elizabeth, besides Ann.  His son Samuel withdrew from the faith in 1766, and in 1772 married Margaret Cadwalader in Christ Church.  (Margaret was the daughter of Dr. Thomas Cadwalader, who is also buried in our yard cemetery.  I am not sure if Cadwalader Park was named after him or another of his family.  While Margaret and Samuel were not buried in our yard, their son Thomas Meredith is to be found here.)  Here George Clymer enters our story:  he married Reese’s other daughter, Elizabeth.  George Clymer also went into the Meredith shipping business.  And his wife was, like Ann, disowned by the faith when she married George in 1765, again in Christ Church of Philadelphia.

Actually, George Clymer was as close as possible to being a Quaker without actually being one.  His mother was another disowned Quaker, thrown out of Meeting for marrying an Anglican.  Orphaned by the age of seven, George was brought up by his mother’s sister, a Quaker, and her husband, William Coleman, a wealthy Quaker merchant and one of the founders of the University of Pennsylvania.  However, the Colemans did not raise George as a Quaker, and when he married, his wife was indeed disowned by her Meeting for marrying out of the faith.  And his sister-in-law’s husband, Quaker Henry Hill, apparently was never disowned only because he never actually belonged to a Meeting!

There is a record of a major disagreement between George Clymer and Henry Hill.  Reese Meredith loaned Henry some urgently needed funds during the Revolutionary War.  After Reese died, George started pressing Henry to repay the debt to the estate.   Henry refused, and the two apparently were never reconciled.

The historic era in which these men functioned can be illustrated by several small facts:  Henry Hill was a colonel in the Revolutionary Army, and probably fought in the battles of Trenton and Princeton.  He served in the Pennsylvania Assembly, where, most notably, he opposed approval of the new Constitution, the one George Clymer signed.  This “antifederalist” position was rather unpopular in eastern Pennsylvania and New Jersey; in response, the “federalist” newspapers harshly criticized him.  Samuel Meredith, George’s brother-in-law, was appointed by George Washington as the first treasurer of the United States.

Ann Meredith Hill died, probably of epilepsy, in 1787, when the (future) Physick House was in the process of being completed.  She was buried in a Quaker cemetery.  In 1798 Henry Hill died of yellow fever and was buried in an unmarked grave.

The short biographies I have found of George Clymer do not repeat the story I was told.  George Clymer bought his Morrisville house, Summerseat, in 1798.  He deeded it to his son, Henry, in 1805, but continued to live there until his death on January 13, 1813, which apparently took place there.  (Joseph H. Satterthwaite’s unpublished list of burials in our cemetery states that George died in Morrisville.)  David W. Maxey informed me in private correspondence that George was buried in Trenton at his own request.  “Samuel Meredith, who was then living in Trenton (precariously so because of heavy debts incurred in land speculation), was one of the mourners at graveside, as we know from contemporary family correspondence…. My guess is that George Clymer deliberately chose the destination in your graveyard because of a residual attachment to the Society of Friends.”

There may indeed have been ice in the Delaware River in January, 1813, but it did not stop George Clymer’s son Henry from having him buried in Trenton.  In fact, Henry Clymer and his much younger brother George are also buried in our graveyard.  The ties of the second and third generations of Clymers to Trenton have not been explored.

George Clymer and his Quaker Connection.pdf