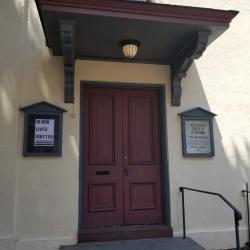 We were appalled and sickened by the brutal killing of George Floyd in Minneapolis on May 25, 2020 by a white police officer.  The fact that this has sparked a fire of outrage all over the country and the world indicates that it is time to finally end racial injustice.

We cannot go back.  We must not stay the same.  We have to move forward to improve race relations and make this country a place where everyone can realize his/her potential.  The "American Dream" is more of a nightmare for some where their children can be shot on a playground.  It is not acceptable that our black/brown neighbors live in a state of constant fear and trauma.

As Michelle Alexander states in a recent Op Ed piece in the New York Times: "Unless we choose a radically different path now, our persistent racial divisions and oppressive political and economic systems may unravel our democracy sooner rather than later.” www.nytimes.com/2020/06/08/opinion/george-floyd-protests-race.html

The Rev. William J. Barber II, co-chair of the Poor People’s Campaign:  A National Call for Moral Revival, refers to systemic racism as a "wound".  He said, "There comes a time in every generation when the wound becomes so infested that the body politic cannot stand it.  I pray that this is one of those moments."

We applaud the recent acts of the New Jersey Attorney General Gurbir Grewal to launch a statewide database of police use of force, create a licensing system for police officers and make public the names of police officers who have committed serious discipline violations.

The Spirit has rent the veil of our white fragility and we can now see where white injustice against our black neighbors, friends, and relatives has been masquerading as "justice" for centuries on end.   We commit our hearts, checkbooks, time, and physical beings to the leadership of Black Lives Matter and other black leaders in our common struggle to right this grievous wrong by nonviolent means.  Only a prosperity based on real equality merits that term; any other prosperity is pure fiction.