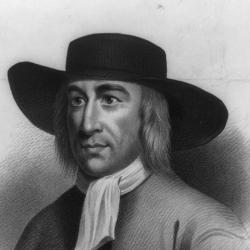 The origins of the Society are found in the seventeenth century in England, a time when many were questioning the established beliefs of the age.

George Fox (1625—1691) did not find answers to his questions in any of the churches of his day. Out of his searching came the spiritual message which swept a large part of the country and which resulted in the formation of the Religious Society of Friends.

Friends witnessed to an Alternative Christianity quite distinct from the churches of the time. As a result they were persecuted both by Cromwell’s Puritan government and by the restored government of Charles II. Fox did not intend to start a new sect.

Pursuing Peter’s teaching, Fox called for a radical, egalitarian, spirit-filled Christianity that would not be oppressive of people on account of race, sex or class. He maintained that the message of the early church had been lost when the church became institutionalized and believed that he, and others with him, were in exactly the same state as Apostles, possessing the same power to teach, to heal and to prophesy.

George Fox challenged the belief of the Roman Catholic and Episcopal churches in the necessity for, and the authority of a hierarchical structure of priests and bishops. He claimed that everyone was able to have a personal relationship with the living Jesus without having to depend on the intercessions of a priest or minister. He taught that there is one, Jesus Christ, who can speak to each person’s condition and the responsibility for ministry therefore rested upon all.

Fox preached the good news that we were all children of God and that, as children of God, we had inherited powers from God. Each of us was given a measure of this power or light and, in accordance with how we used it, so more would be given to us. Jesus had possessed this power or light without measure so that he became the Light and the Light within us is Jesus Christ.

Today we find Friends who would express their beliefs in as Christocentric terms as Fox, as well as Friends who would describe themselves as non-theists, and everything in between. And while Friends have no creed, they share several common beliefs; like continuing revelation. Friends believe that things once thought to be revealed to a special few can be experienced directly by all. From this stems the belief that there is divine light within all people. Quakers sometimes use the acronym SPICES to describe their basic testimonies: Simplicity, Peace, Integrity, Community, Equality, and Stewardship.

Friends' meeting for worship is a united search for truth and understanding that helps us clarify our purposes and strengthen our resolve to live up to them. Because of this inner experience, worship after the manner of Friends is spontaneous and unplanned. Until we have gathered and settled into silence as a group, no one of us can foresee how this common experience may develop, since no one of us knows in advance what the needs or creative powers of the group may be. Each meeting for worship is a new adventure, and a planned program might stand in the way of some fresh insight which the group might achieve.

We feel that in the practice of the Friends' manner of worship, we have found a method which is free and vital. Wherever our search for truth and spiritual growth may lead us, we feel it is high adventure, and we invite you to share it with us.