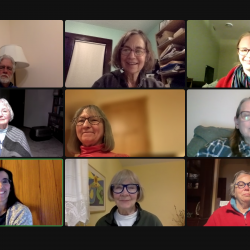 On the evening of May 25 a group of around 10 people, including Mar

Valdecantos and Lisa Sexton, met by Zoom to hear about anti-racism

Lisa Sexton described work of the Say Their Names Northfield

organization, which has a Facebook and a web presence, both readily

found by searching online.    Say Their Names was founded in the

aftermath of George Floyd's murder, and has been led partly by

Cecilia Cornejo, a frequent CVFM attender.   Over the past year the

as well as other important Black cultural figures.   These interventions

centered on chalking names and faces on Bridge Square sidewalks,

but a local ordinance appears to forbid this use of public space,

so other media, such as physical posters and online postings, are

Coalition.  The NAAC, also founded in the wake of George Floyd's

and advocacy for social improvement.   Soon after its formation the

on helping low-income and immigrant residents improve and eventually

own their own living quarters.  We learned that housing problems

are difficult and severe in our community, and that obtaining

rather than Social Security numbers.    In the long run NAAC hopes

to see the creation of a resident-owned community (ROC), in which residents, often

formerly renters,  own their own physical homes or trailers and

share ownership of the land.  The NAAC has used our contribution

largely to support modest stipends for people, many of them poor,

who attend meetings and participate in NAAC work.