In Loving Memory of Giovanna Fjelstad 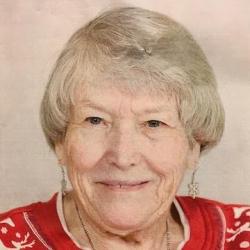 Giovanna Fjelstad was born in 1932, led an active and meaningful life, and passed away following a stroke in June 2019. Throughout her life, Giovanna was engaged in the community, taking leadership in education and peace activism. She was born in Berlin to parents who were physicists engaged in world-changing scientific research. The family escaped from Germany during the rise of Hitler and moved to the Ukraine. Subsequently, Giovanna’s father was imprisoned during the Stalin purges. With support from the scientific community, Giovanna’s mother was able to flee the Ukraine with Giovanna and her younger brother, Jan. The family traveled to Latvia and then to the United States. Giovanna’s experiences as a refugee profoundly shaped her lifelong exploration of the meaning of family and home.

After many moves, Giovanna studied at Sarah Lawrence College and earned a Masters in Mathematics at Harvard University. Giovanna and Paul Fjelstad, also a mathematician, were married in 1957. Their first son, Per, was born while they were living and working in Norway. Their daughter, Annika, was born while they were at Shimer College in Illinois. Their second son, Kaj, was born in Switzerland during a research fellowship. Paul joined the faculty of St Olaf College in Northfield, Minnesota, where the family resided for the next fifty years. Giovanna and Paul’s youngest son, Lars, was born in Northfield. Although anchored in Northfield, the family continued to travel, including sabbatical years in Germany and Liberia, West Africa. Giovanna and Paul divorced in 1987, although in later years they re-established a steady companionship, sharing meals, concerts, travels, and visits to children and grandchildren.

Giovanna taught mathematics in many settings from elementary school to college, including at St Olaf College and at St Catherine’s University in St Paul, Minnesota. Giovanna loved having her own home at the end of a dead-end street, with woods on two sides of her yard. She nurtured many vegetables and flower gardens there, finding special enjoyment in early spring flowers.

Although the family was active for many years at St John’s Lutheran Church, Giovanna found her spiritual home at Cannon Valley Friends Meeting. She supported the Saturday peace vigils on Bridge Square and was instrumental in the installation of a peace pole in a city park. She consistently served on committees and participated in spiritual nurture activities. Giovanna was creative, teaching herself new languages and crafts. She especially loved spinning and weaving.

Giovanna lived at the Northfield Retirement Center during her last years, where she remained a prodigious reader and found great joy in watching birds, nurturing plants, and witnessing the accomplishments of her grandsons. Giovanna is joyfully remembered and deeply missed by all who knew her.