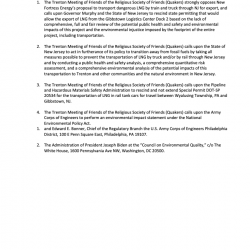 On December 11, 2022 the Trenton Meeting of Friends of the Religious Society of Friends (Quakers) approved this resolution in opposition to the proposed Liquified Natural Gas (LNG) export terminal, the transportation of dangerous LNG by rail and/or truck through the state on routes that pass through or near concentrations of population with a preponderance being near places suffering economic and environmental injustice, including Trenton, and the lack of a thorough environmental impact assessment.

Led by a commitment to our environment and the safety of people throughout the state of New Jersey, The Quaker Meeting here in Trenton adopted this resolution which has been delivered to Governor Murphy, the Army Corps of Engineers, and the Biden administration. A good number of cities and towns around us, including the Trenton City Council and Princeton’s administrative body have also passed resolutions in opposition to transporting and exporting Pennsylvania fracked Liquified Natural Gas (LNG) through and out from New Jersey within the past year. But the process of permitting and approving this plan has not been stopped and there is much pressure to allow it from various industry lobbies. It is very important that congregations and civic groups now raise their voices to protest the dangerous transportation of LNG by rail or by truck through, or even near, our communities. Time is of the essence now as major decisions could be made later in January.

So what exactly is this proposed project and why is it so much of a concern? The first and most immediate issue relates to the transportation of this highly explosive Liquified Natural Gas from Wyalusing, PA to Gibbstown, NJ. Previously LNG has been considered too dangerous to be transported by rail. Generally, in the few other locations in the United States where LNG is being exported, the natural gas is transported to the export site by pipeline and the liquification process takes place at the export site. Bypassing the environmental issues that have put a damper on pipelines carrying Pennsylvania fracked gas across New Jersey, this project has the liquification taking place at the fracking end in Wyalusing. That means that the very dangerous product (LNG) would have to be transported by rail and/or truck across our state. This form of transport for LNG was previously banned, but in 2019 the Trump administration gave approval for this particular rail transport plan from Wyalusing to Gibbstown. This product will be put into special but relatively untested tanker cars to roll through our state on routes that include passing through a number of small communities and dangerously near such cities as Camden and Trenton, as well as endangering Philadelphia. The Delaware Riverkeeper Network has a map of these proposed routes for rail and for truck transport through Pennsylvania and New Jersey. You can access the map from their web site if you put “LNG map” in the search box on their home page.

But why, one can ask, is there this high level of concern by cities, towns, environmental organizations, and those of us in the public learning about it? Safety, safety, safety! The EarthJustice organization tells us “The liquefied natural gas from just one rail tank car — without even considering a whole train — could be enough to destroy a city. It would only take 22 tank cars to hold the equivalent energy of the Hiroshima bomb.” When there is an accident or tank failure with an LNG release, the result could be an explosion of great magnitude and/or a fire that is so hot it cannot be extinguished until the entire amount released is consumed. Because of the amount of methane that is compressed into each tanker the result of a single rupture that did not further ignite other tanker cars would be devastating if it happened near an inhabited area or an environmentally sensitive one. If other rail cars became involved the devastation is practically incalculable.

Many of us are also concerned about the climate change impacts of continuing to encourage fracking for natural gas and the methane releases that are a byproduct of the process. This project would mean the opening of another fracking field in Pennsylvania. Food and Water Watch has gathered the information that underscores the dangers of this project and the impact on the environment. From their website, search “Gibbstown” to see what they have written about this. The most information-filled entry is a fact sheet that was researched and published in August 2021 called “Fracking Nightmare: The Gibbstown Explosive Liquified Gas Export Plan”. Food and Water Watch’s Noa Gordon-Guterman is a local resource who will assist any organization or individual trying to learn more and make an impact. She can be reached at ngordonguterman@fwwatch.org. Trenton Meeting was also assisted by David Steinberg, an award winning environmentalist from Runnemede, whose email is steinberg.david07@comcast.net. We also would love to hear from friends around the area who are concerned or just inquisitive about this. We can be contacted at trentonquakers@gmail.com. Please join us in opposition to this plan.