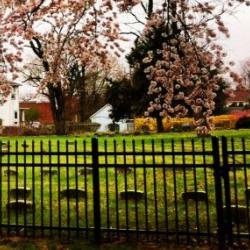 Medford Friends Meeting oversees two cemeteries: Union Street and Main Street.  The office has survey maps and records of both graveyards that are available for inspection.

Plots can be purchased in both cemeteries.  Fees are $400 for members, $600 for members of other Meetings, and $800 for no-members.

Headstones tend to be simple and plain.  The preferred dimensions can be obtained from the office.

More about the plainess of Quaker Cemeteries below:

Since the beginning of the Quaker movement, one of the ways that Friends have distinguished themselves is in their practices connected with death and burial, and Quaker burying grounds, Quaker cemeteries—although cemetery is a word that Friends probably didn’t use until at least the 19th century—are unusual. They are an illustration of how Friends tried to distinguish themselves from the rest of the world.

How Quaker Cemeteries are Different

When Quakers attended church in their parishes in 17th century England, in those churches they would’ve been surrounded by memorials. In some cases grandiose tombs, that even in death were intended to communicate that the upper classes—the people who had sat in the front-most pews by life—still exercised dominion, even in death, by the way that they had buried themselves.

Friends felt it appropriate, required of them, that even in death that they bear testimony against such practices that served to puff up human vanity.

So in a Quaker burying ground in the 17th and 18th centuries, most likely when you approached it you would have seen a simple, unbroken spans of Earth. Usually consisting entirely of unmarked graves. There were always some Friends who found that unacceptable. They certainly didn’t want grandiose monuments that spoke to how some families were superior to others, but they could see nothing wrong with a simple stone that helped them remember where a loved one was buried.

By the middle of the 19th century, Friends finally decided that under certain circumstances, marking graves could be appropriate, and so Friends moved towards a new testimony on tombstones. Tombstones would be allowed, but they had to be simple. The name of the deceased, the date of death and the age, or maybe the date of birth. No ornamentation, no epitaphs, no decoration of any kind, and usually strict limits on height and width.