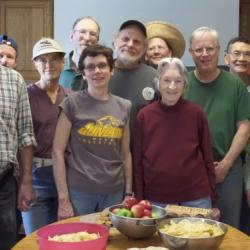 There has been a Quaker presence in Frederick County, Maryland, off-and-on, for nearly three centuries (since about 1725). The current Friends Meeting began informally in the late 1970s when several Friends who had moved to the county decided to gather for worship. Those early meetings were held in homes. Eventually, we outgrew those spaces and began to rent meeting space in the city of Frederick. In the early 1990s, we decided to purchase a large house in the city to be made into our meeting house.

Our Meeting is also a part of Baltimore Yearly Meeting, which is the regional organizing unit for the Religious Society of Friends (Quakers) in the area of central Pennsylvania, Maryland, parts of West Virginia, Virginia, and the District of Columbia. It is through membership in a Yearly Meeting that individual Quakers become connected with the larger Quaker movement worldwide. Friends from all the Meetings within Baltimore Yearly Meeting meet once a year for Annual Session and at other times throughout the year to conduct the business of the yearly meeting.

See the Resources section for more information about Quaker organizations and activities.