The History of West Newton Friends 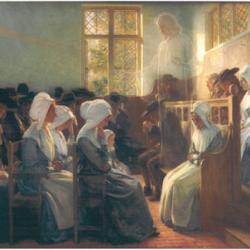 "The Presence in the Midst" -- early Quakers at worship

After the New Purchase Treaty in 1818 moved the Delaware and Miami Indians from this area now known as West Newton, Quakers from the Carolinas and Ohio began moving into this wooded wilderness.  They purchased their land from the United States for $1.25 per acre, erected their first primitive cabins, and began clearing.

Second month, 3rd day, 1827 Fairfield Monthly Meeting approved the request of Friends along Landers Creek for a meeting forr worship of its own,  and Easton Friends Preparatory Meeting  was established  for worship on 1st and 4th days.

They first worshipped in a primitive log cabin in the wilderness about half a mile southwest of West Newton.  Friends brought with them their schools—their meetinghouses were their school houses, and all students attended 4th day morning worship.  Worship was unprogrammed—any person, moved by the Spirit, might rise with a message, but oftentimes worship was entirely silent.

Easton Friends schools were the forerunner of the West Newton Public School System.  Shortly after the Civil War the Township began supporting the Friends school while Friends continued to hire and pay the teachers.  In 1877 the first Township school was built on land that James Haworth had given to Friends, and for the next 87 years  school and meeting existed side by side, working together.

In the 1830’s as Friends continued arriving from Ohio and the Carolinas a larger log meetinghouse (still used by the school) was built on the Easton Burial Ground.  Eventually it was replaced by a frame one.   In 1870, West Newton Friends built east of the road, the meeting house that served us for the next ninety-five years until it was sold to Decatur Township for use of the West Newton Elementary School.

After the Civil War great changes were occurring among Orthodox Friends.  The evangelical fervor felt among other denominations spread to Friends as well. Some of our ministers, who over the years had traveled in the “Service of Truth” became enthusiastic evangelists.

Rigid adherence to discipline was being relaxed.  Color and the fashions of the day were appearing among the gray bonnets and broad brimmed hats at Quaker meetings.  Gradually some clerks were writing the names of days and months into meeting minutes , some clerks were identified as president or secretary, and on rare occasions, even a vote was taken.  Yet—there was the moderating influence of those who clung to traditional ways.

The1870 meetinghouse had been built in the old style with the partition for men’s  and women’s meetings.  By the 1890s the meeting was emerging from the quietist period, the style of worship was changing, and the building was altered to fit it.  Men and women entered by the new south door and families sat together.  In 1878 the name of the meeting had been changed from Easton to West Newton for the name of the town which had grown up around it.

Sometime in the 1880s Cyrus Horton became the first salaried pastor at $25.00 per year.  By 1900, in the interest of keeping the young people, an organ was approved for use in the Sunday School, and eventually music was accepted as a part of worship.

In 1952/3 the Easton annex was added to the building. Finally, there were plumbing and heating systems.  When West Newton School opened in the fall, its sixth grade classes began meeting in our new classrooms, and the close relationship of Friends and West Newton School continued .  On April 1, 1964, the Meetinghouse and grounds were sold to Decatur Township for use of West Newton Elementary School, and on February 14, 1965, the present meetinghouse at 6800 Mooresville Road was dedicated.

The meeting has been a nurturing ground for Friends who have served in missions overseas and wider Friends organizations.  It has provided support, and its share of leadership, for Western Yearly Meeting, Friends United Meeting, Right Sharing of World Resources, Friends World Committee for Consultation, Friends Committee on National Legislation, and others.

West Newton Friends supported Conscientious objectors to War in both World Wars and have counseled two generations of young men who have not been called to serve, but wanted their positions registered with the U.S. Government that “That killing is wrong, and War is not the Answer”.

From now we make new history.  We pray that it will be a story of obedience to the leading of the Holy Spirit, and service to humanity.